After the absolute travesty that was The Last Airbender I thought I’d be free to pursue some worthwhile intellectual subject matter, Troma films’ Poultrygeist for instance. Imagine how happy I was to find this resting on my desk at 9.00am.

I will never be free.

Ok, so here we have Shellman’s latest apocalyptic offering. Its opening, with bodies raining from the sky, is more than a little bit visually arresting, with some beautiful orchestral accompaniment. Although I can think of at least one more apt backing track…

Anyway, fact is people are topping themselves in gruesome and occasionally inventive ways for no discernible reason whatsoever and science teacher Mark Wahlberg and his spouse Zooey Deschanel must escape from Nu Yoik City before it happens to them. All while trying to solve the mystery of What Is HAPPENING.

Actually it’s not so much of a mystery, as the answer’s pretty much handed to you on a silver salver within about twenty minutes of action. Turns out the trees did it. No really. They’ve had it up to here with all those genocidal complimentary Starbucks’ napkins and Ikea chipboard shelving units and are driving us to self-terminate. It’s just as ridiculous as 1970s spoof Attack of the Killer Tomatoes, but completely and utterly earnest. 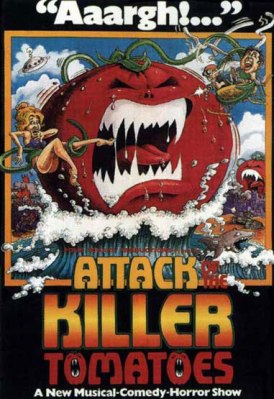 I wish I was reviewing this.

Of course this doesn’t stop all the shots of characters running terrified out of their wits by the wind in the trees from being genuinely hilarious. Though they missed another trick in not licensing the Jaws theme to accompany the windswept waves of grass as they bear down on fleeing protagonists. It’s almost unbeleafable.

It’s not just silly though, the film is genuinely jarring and not in the intended ‘wake up and smell the environment’ fashion. Character interactions and development are just… weird. Ultimately we’re expected to sort of understand and care about X years of back story we’ve never heard about to help unfold a tableau of trite dramatic scenes that don’t make any sense and aren’t even really dramatic. All against a background of the end of the world. Does this make the whole experience more human? No, it just makes it unbelievable. Which actually makes sense as the film itself doesn’t really seem to know where it’s going or what it’s trying to achieve. It just wanders about from setting to setting, gradually whittling characters down as they become inconvenient, till we coast to a complete stop with a wonderful cop-out ending, which they foreshadow about twenty minutes before it actually happens.

As a side note, there is a truly bizarre story twist involving veteran Hispanic-looking actor John Leguizamo (in jumble toothed, frizzy haired, ultra dorky, nerd costume) and his cute-as-a-button daughter Ashlyn Sanchez. Where through a series of utterly contrived events Leguizamo is separated from his daughter and bumped off in short (very short) order, leaving her to be adopted by beautiful Hollywood couple Mark Wahlberg and Zooey Deschanel.

Is this actually happening? It’s like a completely unironic parody of Gone Baby Gone. I guess it’s understandable though, having to look at or identify with average looking people is enough to make anyone feel sick. I just wish someone would kill my hideous father so I can be adopted into a beautiful family of middleclass white folks.

Wahlberg and Deschanel in particular have a lot to answer for as this movie features some the most stilted and unconvincing acting known to man. The delivery is so damned awkward that the nearest thing it can be related to are those strained going-through-the-motions conversations that follow a serious family argument.

“Could you pass the salt?”

“The world is ending.”

Deschanel especially seems to trade in most of the tools of her trade, like expression, range and tone, for big staring eyes. Really, if she were an X-man her codename would be Eyeball, or maybe just Balls.

Mind you, hats off for this particular bit of prose that was carried off with all the aplomb of the finest Shakespearean actors imaginable.

What really grates though is Shellymayan once again injecting his voice directly into the movie to provide us with another helping of that peculiar mystical claptrap that seems engineered just to make anyone with an ounce of common sense grind their teeth into fractured stalactites.

“Science will come up with some reason to put in the books, but in the end it will just be a theory.”

FORCES BEYOND OUR COMPREHENSION, MAN.

Shoehorn in some famous quotes from historical figures (Einstein, go with Einstein!) some pseudo-scientific gobbledegook, buzz topics about bumblebees and job’s a goodun, you’ve completely undermined your green message by specifically removing the legitimacy of scientific inquiry. Supposedly this flim-flam should aid in your suspension of disbelief, like when star ship captains waffle on about dilithium flox capacitors. Except it doesn’t, it just shrouds everything in that lazy quasi-spiritualism that utterly blighted SIGNS, back when we were all stupid enough to watch this tripe in the cinema.

“We don’t know how plant’s obtained these abilities, they just evolved.”

The one thing that can be said for this movie is that it will make you feel like Captain Picard.

Fortunately our two stars have at least one exchange which wraps the whole film up nicely.

I love how the script does all my work for me.