Well howdy stranger, come on in and rest awhile, I’ll send over some whiskey and a fine woman. Let me tell you a story that cost me 8 gold coins and 30 silver pennies. It’s the story of how I travelled to a distant Cineworld to watch Cowboys and Aliens.

Daniel Craig wakes up at the beginning of this movie to find an alien device bound to his wrist. It’s some sort of super extra terrestrial weapon that makes Danny boy the only man that can stop the alien invasion. It’s not very comfortable and makes changing your shirt a pain in the behind. The only way to be rid of the device is to “stop thinking” as he is later told by his one-dimensional snog interest Olivia Wilde. This also happens to be the only way to enjoy this gosh darn movie. Leave your brain in the wagon because this is gonna be one hell of a mundane ride.

The characters are extremely under developed with a script that leaves everyone feeling as dry as the desert they are standing in. Most characters just communicate through a series of smug nods instead of partaking in any intelligent conversation. Daniel Craig seems to be trying pretty hard to make this a decent movie, acting his chaffs off when he gets the chance but it’s pretty tough when your character has a much depth as a beef jerky.

The presence of Harrison Ford however, makes you feel like you’re trapped in an after credits sequence of Indiana Jones and the Crystal Skulls. You just want it to stop, but it won’t, it won’t ever stop!!!

When I want to see Ford fighting aliens I’ll re-watch the original Star Wars trilogy thank you very much.

So the story goes that people are having an argument, aliens turn up before any difficult decisions have to be made. The two arguing sides high five, then team up to fight the space uglies. This happens about 4 times over in the movie and wasn’t that great the first time.

So what is good about Cowboys and Aliens?

Well, Sam Rockwell is as awesome as ever, bringing some honesty and undeniable likeability to a reasonably simple character. Oh and he has a beautifully groomed moustache which gets him nose-neighbour points. This is a cowboy movie!!! EVERYONE SHOULD HAVE A MOUSTACHE!!

A soup strainer, facial furniture, a lip tickler, a mouth brow, whatever you want to call it, this film is distinctly lacking in the face fuzz department.

Here’s how it should be done: 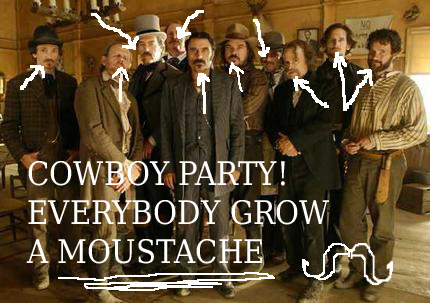 In conclusion I think it’s best if cowboy films just stick to being cowboy films and aliens stick to being directed by Ridley Scott (if you don’t count Prometheus…we’ll get to that another time) and avoiding ever working with George Lucas again. Other evidence to support this case are Cowboys and Vampires, as well as Cowboys and Zombies. I’m banning any more Cowboy & (fill the blank) films. The world needs to shut up and start making more Deadwood.

Cowboys and Aliens definitely isn’t the worst film ever made but it’s a Grand Canyon away from being anywhere near the best.