That’s not just fire and brimstone falling from the sky, it’s just another copy of Chris Fable being hurled from a third story window. This is what we were compelled to do after sitting through this bible bashing piece of bumf.

The narrative of this movie is pretty damn flimsy, it forgets all about subtlety as it ‘updates’ all your favourite stories from God’s Number 1 Best Seller. Title Character, Christian Fable (That’s actually his name!) travels through an unexplained apocalyptic land, meeting up with a couple of Christ Loving Lasses, Faith and Hope, for a religious three-way. He also struggles on through shoddy CGI backgrounds that include a lava stream that flows through a small hill (stupid), an acid trip roller coaster (not as fun as it sounds) and the Valley of the Shadow of Death (or a dimly lit Forest with some Windows Movie Maker lightning effects…) 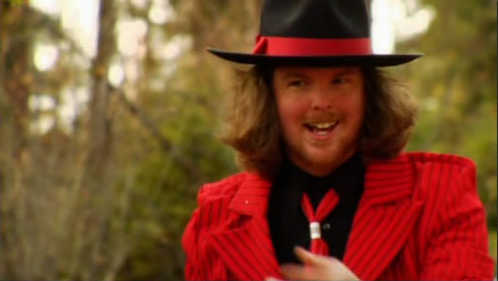 Chris has a number of random encounters with famous bible characters including a sword wielding cowboy, a Dickensian Foster Dad and a wandering boy scout who likes cracking whips (I don’t remember those guys from the New Testament). The acting is atrociously bad, occasionally bordering on hilarious. The snake oil salesman steals the show with a wonderfully jarring performance where he bursts into a musical number (if you can call it that) which he’s probably enjoying a bit too much. Also, Chris seems to have some sort of blinking fit whenever he engages in a conversation. However, this does make for a very enjoyable drinking game if you take a swig of sacramental wine every time Chris has another eye spasm (warning: this game may destroy your liver).

Inebriation is about the only way to make it through this movie. The ‘epic’ conclusion involves bible-bumming Chris facing up to a 40 foot robot being driven power rangers megazord-style by the Devil (at least I think that’s what was going on). Chris has to use the divine might of the bible to beat anything that causes any sort of trouble and so goes all David Vs Goliath on the giant robot’s metallic ass. Devil-tron topples over with sling-shot hit to his cybernetic eye and old Beelzebub gets bum rushed by all the kids from the local Sunday School. Then everyone thanks God that the film is finally over…

It seems to me that Chris Fable is the product of a very bored bible belt congregation with a little too much money left over in the church collection box. The film is so fanatical, you’ll be surprised Mel Gibson didn’t have his metaphorical dinkle rammed into this religious flavoured pie. Weirdly, the film chastises children for sitting on their asses and watching television all day, and yet they’ve just made a movie for kids to sit on their asses and watch all day.
Slow clap for the cast and crew of Chris Fable…

There is an even darker issue with this movie. In making The Adventures of Chris Fable, the creators are attempting to peddle Christianity to the younger masses. Maybe if this was advertised as a modernized biblical-style adventure then I’d kind of be okay with that, but it attempts to trick people into a purchase by pretending to be a cheap-ass Harry Potter film. It is effectively a brain-wash movie and that is really quite terrifying. In religious families I’m sure this film will be an interesting watch, children too young to question all the nonsense may even enjoy it. Christian parents will have a great time forcing this on their kiddiewinks, so that they can grow into to God groupies too. However, normal human beings should definitely avoid this propaganda!

If you Love God then you’ll enjoy Chris Fable.

I’m no believer and I think this film is God awful! (← Wit)